The celebration took place on the State House lawn, where Governor Shumlin signed the bill into law a little over two years ago. Since the law’s passage, we have been successful in defending the law against legal challenges, and manufacturers such as Kraft, General Mills, Pepsi and Campbell’s have decided to label genetically engineered products around the country.

“Today’s celebration shows once again that Vermont is a place where democracy works. 90% of Americans have consistently asked for labels on genetically engineered food and it took our brave state to step up and put the people’s interests over special interests. Whatever happens going forward everyone who helped make history today should be incredibly proud,” said VPIRG Consumer and Environmental Advocate Falko Schilling. “Right now consumers across the country are seeing labels on genetically engineered food thanks to the work that we did here.”

State Senator David Zuckerman, a long-time advocate of labeling, commented on the event saying, “Today is a great day for grassroots organizing in Vermont.  Thousands of individuals from across Vermont worked together to pass this legislation.  I am proud to have been a part of that effort in my role in the Senate, but the success for this rests on the shoulders of many who care about transparency in our food.”

“The enactment of Vermont’s GE food labeling law represents a major step forward in food system transparency. We are grateful to everyone in Vermont and beyond who helped to make Act 120 a reality and grateful to our Congressional delegates who continue to fight against efforts in Washington to deny Americans the right to information they need about their food,” said NOFA VT Policy Advisor Maddie Monty.

The celebration took place under the shadow of looming federal legislation proposed by Senators Roberts (R-Kan) and Stabenow (D- Mich) aimed at eliminating Vermont’s law and replacing it with a national standard that does not require on-package disclosure, does not have penalties for failure to label, and would exclude a significant portion of genetically engineered products from labeling requirements.

“This is a bittersweet day,” commented Rural Vermont Executive Director Andrea Stander. “It is thrilling to gather once again with so many of the people who worked SO hard to make Vermont’s GMO Labeling law a reality. Rural Vermont has worked tirelessly on this issue for more than twenty years.  We are not surprised and we are outraged that our own Congress continues to work to ignore the concerns and thwart the needs of the people they were elected to represent. This is NOT what democracy looks like and we will never give up the right to know how our food is produced.” 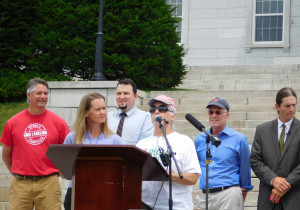 “Our small state has been a pioneer in pushing vigorously for the rights of consumers to know what’s in their food. Our labeling law is set to take effect on July 1. It appears Congress has struck a deal that would preempt our law and replace it with a flawed national labeling standard.  While in concept a national standard makes sense, I have deep concerns with the provisions in this legislation,” said Governor Shumlin. “I’ll be working with Sen. Leahy, Sen. Sanders, and Rep. Welch in the coming days to see if we can remedy the serious defects in this national legislation. If we cannot, this legislation should not become law and I will oppose it.”

On Wednesday night the Senate held a preliminary vote to limit debate on the proposal, where Senator Leahy led a floor fight in opposition arguing, “Vermonters want to make informed decisions for their families and with their limited grocery budgets.  We acknowledge that powerful interests are allied against Vermont’s law and against the nation’s consumers.  That has been a fact from the beginning.  The proposal released last week does not respect the work that Vermont has painstakingly done in this space, and this Vermonter will not – cannot – support it.  Vermonters deserve better.  And so do all Americans.”

Senator Sanders voiced strong opposition to the proposal saying, “GMO labeling exists in dozens of countries around the world. It is not controversial. Already major food companies in our country have begun labeling their products. People have a right to know what is in the food they eat. I am going to do everything I can to defeat this legislation.”

In a statement, Representative Welch joined his Senate colleagues in criticizing the bill saying, “The so-called GMO labeling compromise reached in the Senate is, in a word, stupid.”

Congress will reconvene after the Independence Day holiday and a final Senate vote is expected as early as next week. If the proposal passes the Senate it will need to be approved by the House before being sent to the President’s desk. In the meantime food manufacturers will continue to label genetically engineered food products for retail sale in Vermont.

The VT Right to Know coalition has countless organizations, businesses, individuals, and families in Vermont and across the country (and out of the country!) to thank for their hard work and dedication over the years – THANK YOU ALL!