Why should we label genetically engineered food?

Consumers have a right to know what’s in the food we buy, eat and feed our children, just as we have the right to know how many calories are in the food we buy, and where our food comes from. A number of published scientific studies and reports have raised important and unanswered questions about the healthfulness and safety of GE foods. We should all be able to make informed choices, and have the freedom to choose whether to buy genetically engineered food or not.

What is genetically engineered food?

Genetically engineered foods are produced by means of genetic engineering laboratory techniques that insert genetic material (DNA) from diverse species of plants, animals, viruses, and/or bacteria, into the DNA of plants or animals that, in one form or another, end up on our dinner tables. The foreign genes are designed to produce new forms of toxins, proteins, hormones or other substances in the GE plant or animal organism. This type of genetic alteration is not found in nature.

In 2009, 93% of the US soybean and canola crops were genetically engineered, as well as 86% of corn, 95% of sugar beets, 80% of papaya and 13% of zucchini. A new variety of GE sweet corn was introduced, grown, and marketed in the US in the summer of 2012. All of the above crops have been genetically engineered to produce their own form of insect toxin (or toxins) or to withstand high doses of a growing number of weed-killer pesticides. These GE crops are used to produce a great many of the grains, meals, oils, sweeteners and other food ingredients that are found an estimated 60-80% of the packaged, processed foods on supermarket shelves. Check out our resources page for more information. 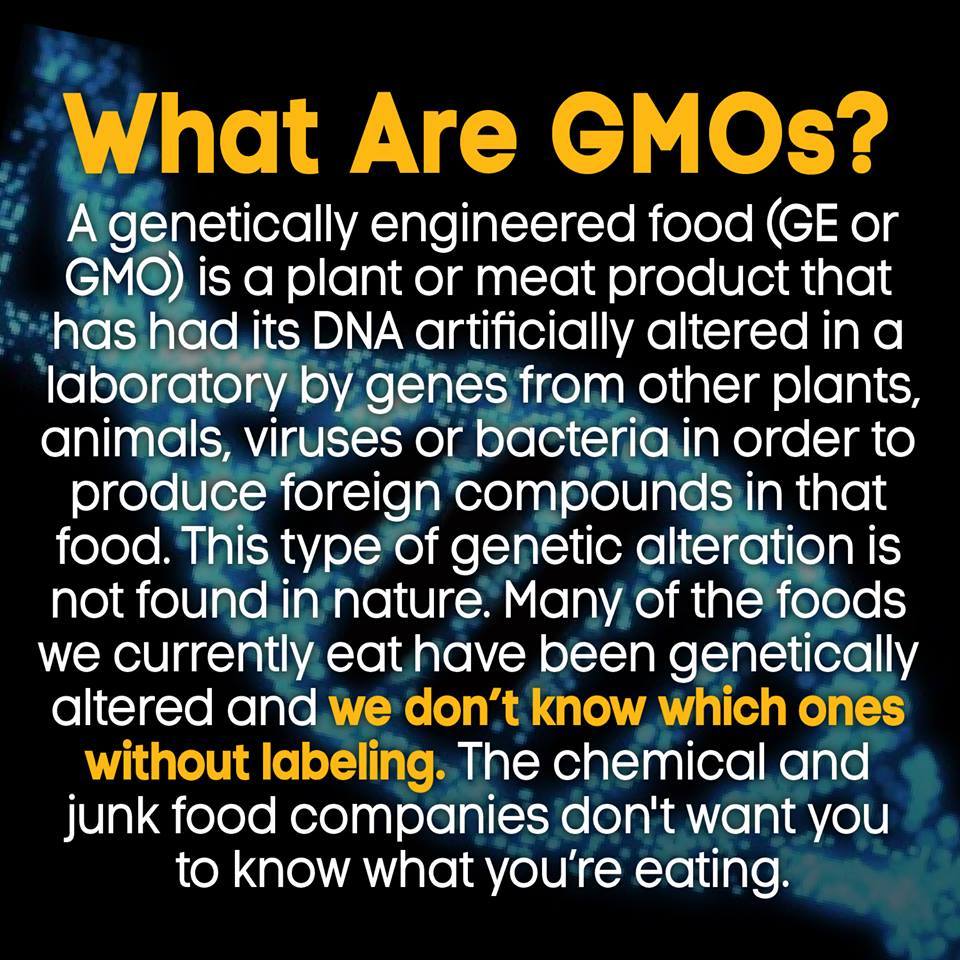 How do I know if I’m eating genetically engineered food?

Currently the only way you can know that your food was not produced with genetically engineered ingredients is by purchasing certified organic products or products certified by the Non GMO Project. Without labeling requirements it is impossible to tell if conventional foods are produced with genetically engineered ingredients, even if they are labeled as “natural.”

What are we doing about the lack of labeling?

In 2014, Vermont became the first state to require common-sense labeling of genetically engineered food sold in retail outlets such as supermarkets (but not including restaurants). The VT Right to Know GMOs coalition also works with other states aiming to pass similar legislation, as well as advocating for a national mandatory labeling standard that would comply with Vermont’s law, so that more Americans know what’s in their food.

Yes. We didn’t used to label food with calorie or nutritional information, but we do now, and most consumers use this information every day. Our law simply requires food producers to also label foods that are genetically engineered. Similar food labeling laws and requirements already exist in over 60 countries, including the European Union.

What are the health risks of genetically engineered foods?

The U.S. Food and Drug Administration does not perform health studies or safety testing of genetically engineered foods. In fact, they leave the determination of these foods’ safety to the biotech companies that produce them. Recently, over 200 scientists signed on to a statement declaring that there is no consensus on the safety of GMO foods.  Independent studies continue to show that genetic engineering of food crops can lead to the production of toxins, allergens and other substances that may pose health-related risks. In 2011, Canadian researchers reported that 93 percent of pregnant women’s blood and 80 percent of their fetal cord blood samples contained a toxin found in a genetically engineered corn that produces its own pesticide (Bt corn). In 2012, French researchers studied the effects of a GE corn diet on rats over the course of their lifespan, finding that the rats developed tumors and other health problems. The health-related implications of these findings, as well as the findings of many other scientific studies from around the world, have not been properly and fully investigated. Some reports have emphasized that the effects on our health due to consumption of GE foods may be very subtle, and of greatest importance to individuals who are aged, very young or immune system impaired. Without labeling, not only is the opportunity for consumers to avoid GE foods denied, but the ability of medical professionals and public health agencies to identify, track and address any unanticipated GE-related health effects is greatly limited. Fore more information, check out our collection of reports and articles about the health and safety risks of GMOs.

How many other countries require labeling of genetically engineered foods?

Over 60 countries including members of the European Union, Japan and China, already label genetically engineered foods. Vermont is a leader on this important issue here in the United States. 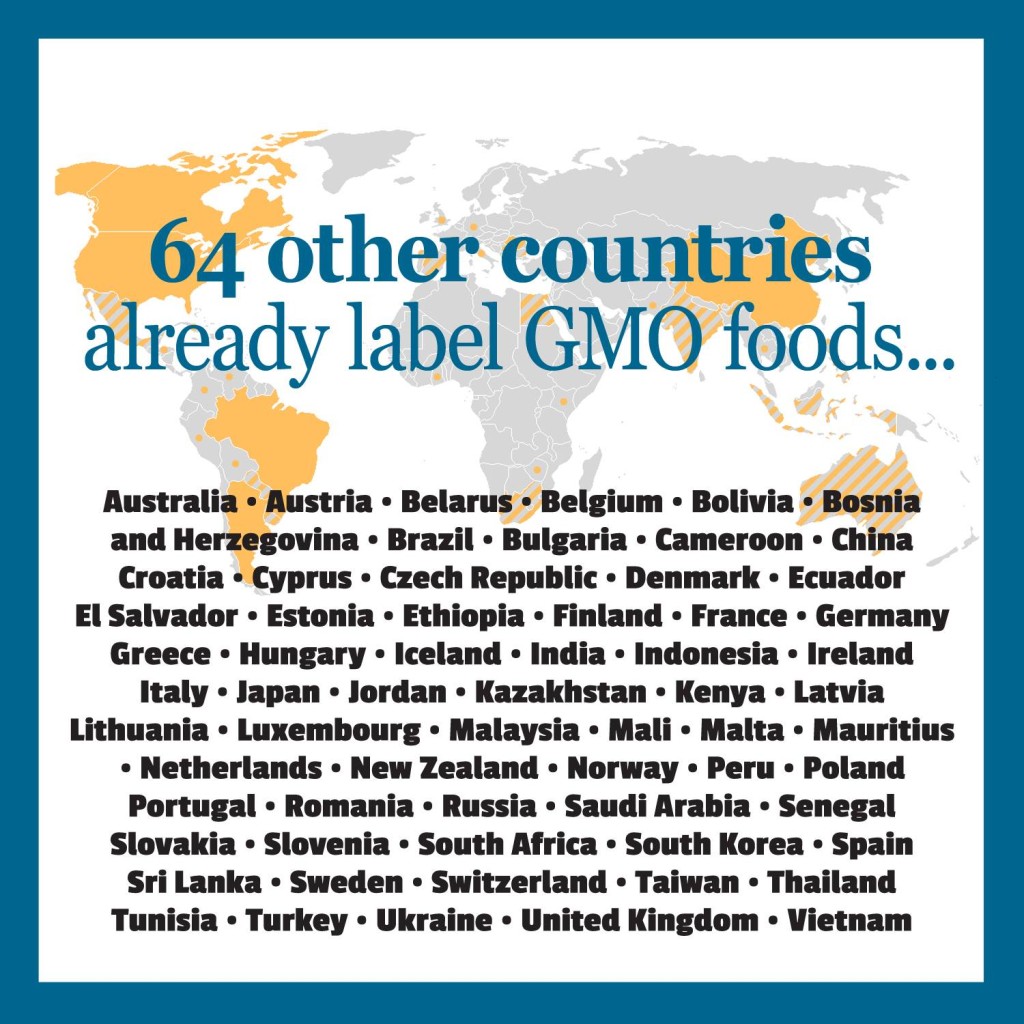 Where would the labels be?

The bill simply requires that a notation be added below existing ingredient labels which says that the product is partially produced with genetic engineering. For genetically engineered whole foods that are not packaged, such as GE sweet corn or fresh GE salmon, the front of the package or the store shelf must be labeled.

Will there be a cost to consumers or food producers?

No. Our bill is intended to have little to no cost impact on consumers or food producers. The bill will simply require that genetically engineered ingredients be disclosed on labels or store shelves. Cost to food manufacturers will be minimal since companies routinely revise labels on their products.

What foods would be exempt from labeling under the Act?

Would the public support labeling of genetically engineered food?

Definitely. Polls have constantly shown that over 90% of the American public believes that genetically engineered foods should be labeled.

Over 30,000 Vermonters, and more than 200 diverse organizations have signed the VT Right to Know GMOs petition in support of GMO labeling.

How can I help?

Take a look at our GMO Action Center, and share it with your friends! Thanks to folks like you, we’re now starting to see labels on foods produced with genetic engineering. But, the fight isn’t over yet and we need to stay vigilant to ensure Vermont’s law moves forward. If you want to do more, email us at vtrighttoknowgmos@gmail.com for more ideas.